Centralized Tech companies skyrocketed during the Covid-19 pandemic. It was the perfect set-up for on-line digital growth from everything from ordering more goods from the home, more web calls outside of the office and higher mobile and wireless growth.

It was also the perfect set-up for hackers and fraud, which has also skyrocketed during the same period. Centralized tech has had its day and its days since the 1990’s. And surprisingly enough, email is over 50 years old! Yes, it was 1971 when Ray Tomlinson invented electronic mail through the ARPANET’s networked email platform. It’s no wonder that Centralized databases and email are nothing more than huge risk pools for fraud. They are just old technologies.

A Bust in the Making – Told You So

Last year was another perfect set-up, but for a fall. Anyone looking from outer space could have predicted how this would turn out. Tim and I predicted this on multiple World from Here episodes earlier in 2022, Told You So!

The wild market for expensive digital apes, digital art, and unrealistic crypto of the snake oil kind, were pure speculation. They were of the “greater fool theory”, that someone even more foolish would pay even more. It was in the set-up of FTX and other centralized markets. We also saw that in much of the housing market and with run-away inflation.

As Tim and I’ve said, this is deja vu to what we experienced in the Dot.com era. A bubble was in the making and money thrown at companies without a product and speculation is like what Tim Price, the President of MCI used to say, “Tying two rocks together still won’t make them float.”

Out of the dust, while you might not be able to see it yet, is some welcome news! While market hype works both ways, what many are talking about that “crypto is bad” don’t realize is what is happening globally with the underlying technology called blockchain.

While over the past year, many of the largest financial institutions, like JP Morgan, have been quietly integrating blockchain and sending billions in payments. The largest enterprise companies are seeing a shift from Proof of Concept to being the core technology that is providing efficiencies in base level costs. have started to integrate blockchain technology. That will continue in the enterprise area as well as trickle down into all businesses.

The set-up is very clear to see:

1). Digital fraud continues to plague businesses and individuals due to:

· Centralized Databases that are being hacked daily

· Email which provides risks, with phishing, spoofing and ransomware attacks

2). The importance of digitals growth and future growth

3). Old technology which has become outdated, costly, and risky

The answer to the above is Blockchain. It’s the most secure technology. It provides a digital record of everything. It eliminates administrative costs and paperwork, and it saves time.

Predence Research just released a new report showing the market growth of blockchain from today’s $10.6 billion dollars to over $1.593 Trillion by 2030! The report stated, “With the growing use of mobile and the penetration of internet, individuals are gradually attracted and prompted to use Blockchain. These changing trends and the distributed computing environment have made organizations vulnerable to privacy issues, driving the demand for blockchain solutions”.

The most significant next stage of growth will be in the middle market and small businesses as newer solutions become easier to adopt. In the past, blockchain was “geeky”, you’d need developers and significant budgets to deploy it. Companies like BlockCerts have now made it as simple as downloading a wallet, getting your private key and start using decentralized apps that eliminate the need for Centralization altogether. 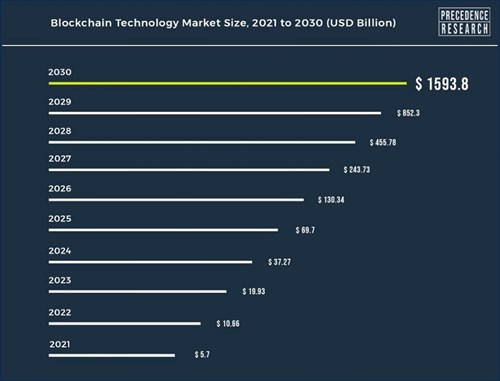 What Are Some of the Experts Saying?

While the news reports on the demise of “crypto” and categorize everything as “crypto”, the technology for blockchain and its growth is the real story here. As noted in this article, blockchain technology is entering into the renaissance phase of adoption where globally the benefits are now being realized outside of the original crypto sector.

Shark Tank’s Kevin O’Leary believes that there is a risk of volatility until legislation. This sector of the market will be an important component of the future S&P. He pointed out that Amazon corrected 50% per year, for every year for many years until the market picked up on their new technology. This is a repositioning, and a “wash-out event” is a good thing. O’Leary stated that a third of developers out of college are going into blockchain. The future brainpower is going into blockchain. He stated that he has, “big positions in many companies in this sector” and is a long-term investor for the sector.

1). The Reinvented Internet Will Gain Adoption

The real prediction that Tim is making is in the function of the past “exposed internet” versus what will be used by individuals and businesses in the future. If there is a simple way to stop being tracked, hacked and exposed, while reducing risks, paying less and staying private, adoption will naturally happen.

2). Authentication is the next wave for every business

We agree with one thing that Elon Musk is saying, “Authenticating Humans” is a good thing. We extend that to authenticating brands, products, links and everything you do in the digital universe. The BlockCerts patented solution provides the first Private Authentication Blockchain and with the simple decentralized apps and tools to do your home life or work life on the “Reinvented Internet”.

A digital wallet was a crypto solution for protecting and trading crypto. The greater market has not realized yet that the technology of the private key to protect what is important can be expanded too more than just crypto. By integrating “authentication” from point #2 above, with payments, apps, protecting passwords and other important items in life, the Digital Wallet will become mainstream for individuals and companies.

Fortunately, BlockCerts has brought blockchain to the mainstream for individuals and companies. You don’t need a developer; you just need a download. Tim Vasko is a bright futurist and technology visionary who saw the need for simplifying blockchain for the mainstream years ago. What is plaguing Ethereum today is that it wasn’t built for business and transactions. Mr. Vasko saw those shortcomings in creating the business blockchain of the future, in BlockCerts and connecting the key application elements that will expand the growth on the platform from the current 12 or so apps to the new apps store for blockchain. You don’t have to wait until 2023. You can get started by downloading the ORBITi private browser and then following the prompts to download the BCERTin wallet to create your private internet and access the tools to work in the future today.