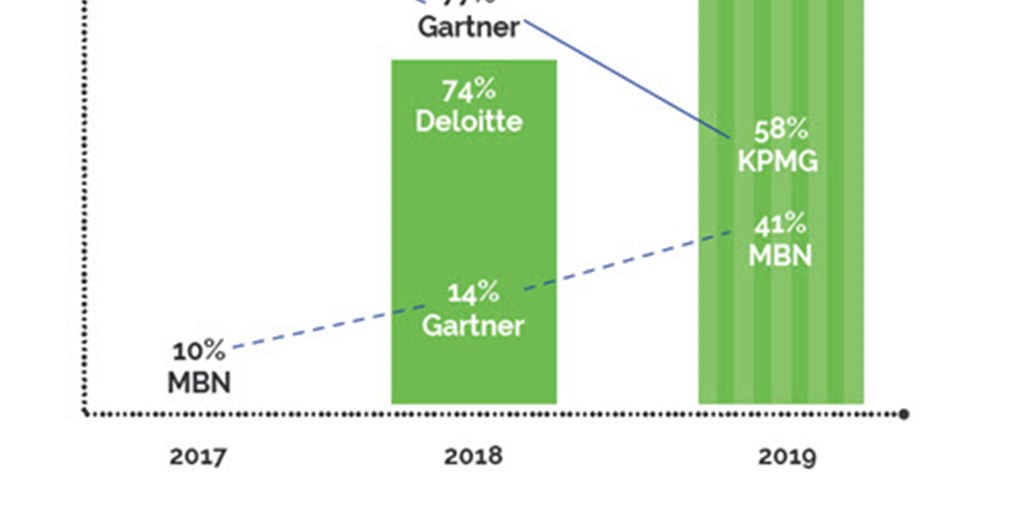 This past Blockchain So What? Podcast, Tim Vasko and I talked about just how far perception and recognition have come in the blockchain space. The numbers in surveys are also reflected in the interest level we’re seeing in our day-to-day business. I thought that I’d highlight some of the blockchain surveys and map the results between those studies over the last year. The result is a quick view into what’s happening under our feet and the transformation of blockchain technology.

In the C-Level Blockchain Survey Graph above we’re seeing a major shift in blockchain interest and the next stage for planning, knowledge and involvement. The inverted lines represent a marketplace that is now getting engaged in the blockchain process. The most recent PWC survey showed that “84% say their organizations have at least some involvement with blockchain technology”. The recent KPMG study revealed that 41% have current plans to implement within the next 3 years, a 400% change from MBN’s 2017 study.

In 2017, only 10% of UK businesses planning to implement blockchain technology said that they had the expertise to do so. The survey by MBN Solutions showed that while the appetite for blockchain is there, few executives were equipped with the skills and confidence to take a bite. According to the survey:

Later in May of 2018, research giant, Gartner revealed that while 66% of chief information officers (CIOs) recognize blockchain technology, only 22% plan on using it. The survey pointed to problems in skills acquirement, showing that in order to accommodate the hyped state of the blockchain, CIOs must work towards a deeper understanding of the technology.

Just last year, the numbers showed an underwhelming range of adoption. This year, that is all starting to change. According to KPMG’s Technology Industry Innovation Survey: Blockchain including over 740 global leaders, 41% plan to implement blockchain within the next three years. That’s a HUGE jump in less than 10 months, that’s a jump of 292%!

The global study also revealed which countries hold the greatest promise for blockchain disruption.According to KPMG’s Technology Industry Innovation Survey: Blockchain including over 740 global leaders, 41% plan to implement blockchain within the next three years.TWEET THIS

2019 is the year of adoption and the numbers are here to prove just that. What will happen in the next three years? Only time will tell….